The Boston Underground Film Festival Announces Inaugural Launch of BUFF-o-WEEN from October 17th through the 20th Titles Include Extra Ordinary, The Golden Glove, Tammy and the T-Rex and More! 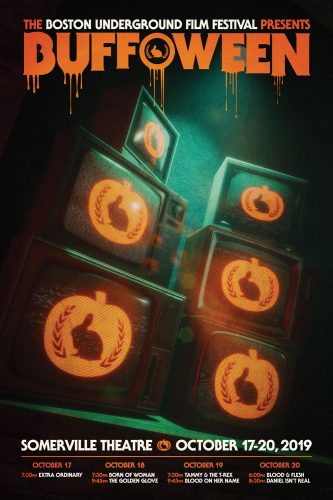 Somerville, MA – For the first time in its 22 year history, the Boston Underground Film Festival is launching a mid-year mini-fest to bring a selection of seasonally appropriate thrills and chills to New England cinephiles! Marking the midway point between 2019’s BUFF and the upcoming festival in March 2020, the weirdos behind BUFF are teaming up with the historic Somerville Theatre in Davis Square to bring you the first-ever edition of “BUFF-o-WEEN” this October!

Showcasing six feature films plus an incredible block of short films currently slaying genre audiences around the world, BUFF-o-WEEN seeks to expand on the festival’s annual offerings of bizarre and insane programming into the holiest of New England holiday seasons.

“For a long time we’ve thought about creating space for contemporary horror and genre film in the Boston area in October; the city has incredible repertory programming and marathons this month and we wanted to bring a little something different to film fans in the area to celebrate the Halloween season,” said BUFF’s Artistic Director, Kevin Monahan. “As a programmer, it’s a dream come true to bring even more fantastic films to Boston for some big-screen love from our incredible community of film fans and filmmakers,” said BUFF’s Director of Programming Nicole McControversy.

Opening this inaugural series of spooky and sublime delights is hilarious and charming paranormal comedy Extra Ordinary, by Irish writer/director dynamos Enda Loughman and Mike Ahern. Courtesy of our neighbors to the North, we’re thrilled to present “Born of Woman,” an epic block of international short films helmed by women directors, curated by Fantasia International Film Festival’s head programmer Mitch Davis. Also hot off its recent Fantasia premiere, we have director Matthew Pope’s tense, southern gothic thriller Blood on Her Name while the horrifying story of Germany’s most notorious serial killer is brought to life in Fatih Akin’s The Golden Glove. 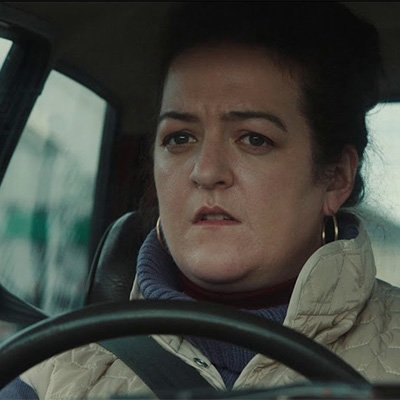 BUFF-o-WEEN kicks things off with this spoopy [sic] tale of a ghostbusting psychic driving instructor—played to pitch-perfect perfection by Maeve Higgins—who tries to save a family from a spirit-conjuring has-been seeking to renew a record deal—and a Faustian bargain. Irish writer/director duo Enda Loughman and Mike Ahern breath new life into the horror-comedy genre with this absolute gem. Think Ghostbusters as if set on Craggy Island; in other words, 100% Pure BUFF. Co-presented by the Irish Film Festival Boston. 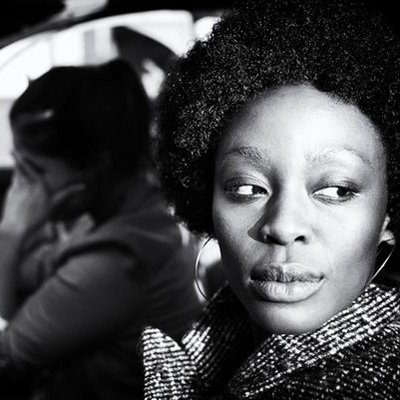 BORN OF WOMAN 2019
Montreal’s Fantasia International Film Festival serves up an annual showcase of intimate, auteur genre visions, this year’s edition featuring eight exceptional short films from an array of international talents that promises to leave you gobsmacked and amazed. BUFF-o-WEEN is honored to screen this incredible collection for Boston-area audiences. Co-presented by the Boston Women’s Film Festival and Women in Film and Video of New England (WIFVNE). A portion of the box office from this screening will be donated to Women on Waves and Film Fatales. 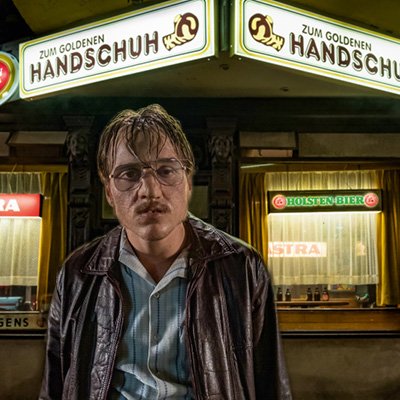 THE GOLDEN GLOVE
“Beneath all the horror, there is hope. You just have to look past all the dead bodies to the darker heart within.” Redmond Bacon, CULTURED VULTURES

Critically acclaimed director Fatih Akin (Head-On, The Edge of Heaven, In The Fade) brings to life the harrowing tale of German serial killer Fritz Honka, heinous haunter of 1970s Hamburg’s red light district. Booed and rebuffed at its Berlinale premiere earlier this year, The Golden Glove is unflinching in its examination of human brutality and desperation, both of this notorious murderer and of a society that helped birth him. An ugly film about uglier acts, viewer discretion is certainly advised, though the undeterred will be rewarded by a richly characterized, oft empathetic depiction of a sidelined generation that survived the horrors of war only to be forgotten in the grimiest of dives, hustling for pfennigs to drink away their trauma. 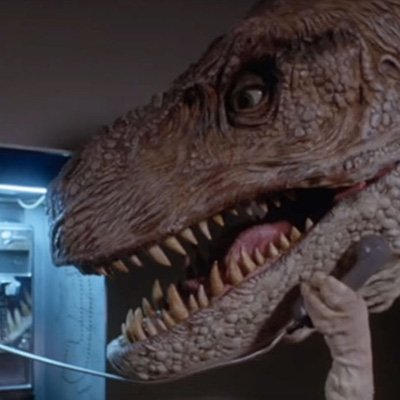 TAMMY AND THE T-REX
“Heads are bitten off, people are disemboweled, skulls are crushed, bodies are flattened, all with the kind of gory excess that recalls the splatstick comedies of Peter Jackson.” Patrick Bromley, Bloody Disgusting

Directed by Stewart Raffill (of Mac and Me and Mannequin Two: One the Move fame) and released in 1994, Tammy and the T-Rex stars Denise Richards and Paul Walker (!) in the story of an evil scientist who transplants the brain of a murdered teenager into the body of a Tyrannosaurus. Love, uh, finds a way, in this newly unearthed “gore cut” of the cult classic time forgot. Fully restored to its R-rated, 4K glory by the fiends at Vinegar Syndrome, Tammy destroyed audiences at Chicago’s Cinepocalypse over the summer; after stops at Fantastic Fest and Beyond Fest, BUFF is pleased to bring this epic splatterpiece to Somerville. No one will be spared. Courtesy of the cine-heroes of the American Genre Film Archive, this one must be seen to be believed. 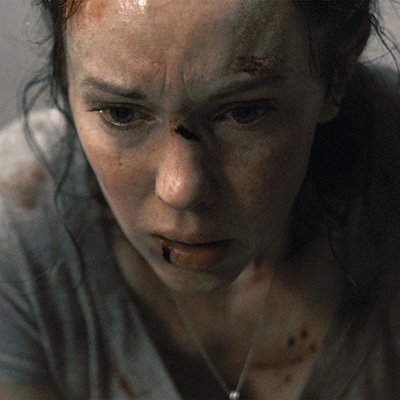 Ozark’s Bethany Anne Lind stars in this crime thriller about a woman who digs herself a deeper hole when she lets her conscience get the better of her when she tries to cover up an accidental killing. Much in the same vein of BUFF fan favorite, Blue Ruin, Yellow Veil Pictures picked up this tense, gothic horror flick immediately after it’s world premiere at Fantasia this July, and marks a stunning debut feature for writer/director Matthew Pope. 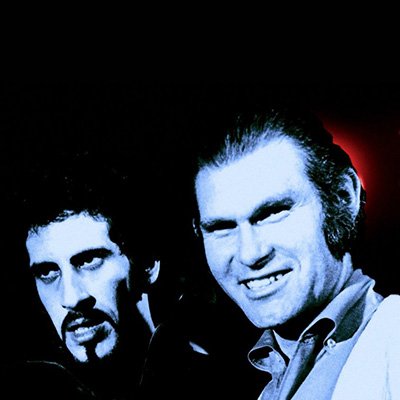 BLOOD & FLESH: THE REEL LIFE AND GRISLY DEATH OF AL ADAMSON
The director of Lost Soul: The Doomed Journey of Richard Stanley’s Island of Dr. Moreau, David Gregory, brings us another true story of a visionary filmmaker. However instead of focusing on one failed project, Gregory gives us a fascinating overview of the entire life and career of underappreciated auteur Al Adamson. Responsible for such 60s/70s era B-flicks such as Psycho A-Go-Go, Dracula vs. Frankenstein, and Black Samurai, Adamson’s methods and experiences provide a wealth of entertainment and his unfortunate end makes for moving drama in this comprehensive documentary. 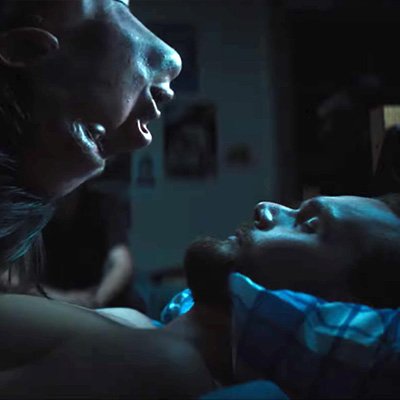 Individual tickets will be available for sale soon at the Somerville Theatre’s box office or online.
BUFF-o-WEEN is the latest venture in BUFF’s year-round programming, which includes Somerville-Theatre-based monthly “Dispatches from the Underground” series, and its annual festival at the Brattle Theatre in Cambridge.